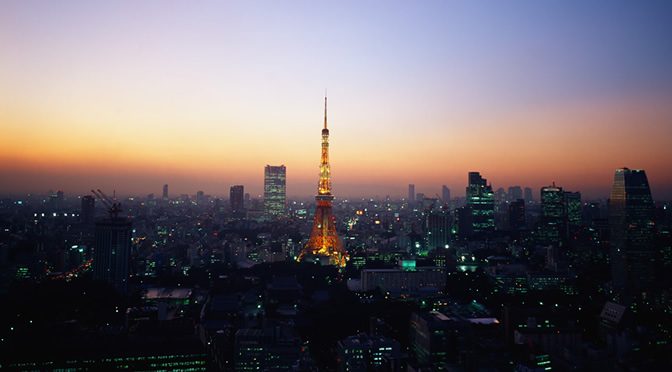 The origins of Edo Kiriko are found in imitations of British cut glass,
The magnificent Kiriko surprised even Commodore Perry

It is said that Edo Kiriko started in 1834 when a man called Kyubei Kagaya, who ran a glass wholesale store in Edo Odenmacho, imitated British-made cut glass and applied engraving to the surface of glass. Furthermore, legend tells that U.S. Commodore Perry, the man whose arrival of black ships in the closing days of the Tokugawa shogunate helped open up Japan in 1852, was surprised with a beautiful Kiriko glass bottle presented to him by Kagaya.
In 1882, the Ministry of Works Shinagawa Engineering Center invited from Britain a technical expert of western style cut glass and printed patterns, Emanuel Hoputoman, so that they could learn these techniques. Many of the sophisticated cutting techniques that have been handed down today were started at this time. Afterwards, despite the numerous difficulties in addition to earthquakes and wars, the traditions of Kiriko from the Edo period have not died out, but instead have been preserved to this day.
Incidentally, the development of Edo Kiriko was centered on the downtown area along the Arakawa River, because the main material in glass, silica, was transported by ship from Fukushima, the mining area of silica at that time, to downtown Tokyo along the Arakawa River.

Delicately beautiful expressions,
The diverse Japanese-style designs that were loved by the people of Edo 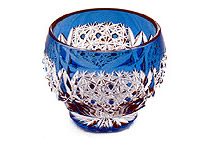 In the reflection of light in one representative design of Edo Kiriko, it is possible to see Nanako which also looks like the scales of a fish. This was also a representative cut glass design in England and Ireland from the 18th to 19th centuries. Besides this, there are other designs such as the chrysanthemum woven-bamboo pattern, seven treasures, leaf of hemp and fence of bamboo. Furthermore, these designs have been used in various combinations. These designs, which have been handed down since the Edo period, can surely be called expressions that freely show the Japanese-style delicate sense.
This cut glass radiates with a momentary flash of light, wearing these designs that were also loved by the people of the Edo period. They give off beauty such that instinctively you take them in hand and which fascinates your heart and soul. If you try really staring at these designs, you will see that each line and the spaces between these lines are extremely tiny and you will be left with a feeling of the ingenious skill of the craftsmen that made them.

The Way of Making Edo Kiriko

The pattern is cut and the piece is ground smooth,
The polishing process determines the attraction of Kiriko

The distribution of the design is decided upon and marks are affixed that will become the reference points for where the pattern will be engraved. The lines that rely on these to form the basis of the pattern are finely drawn and are then shaved down to a shallow depth. In the later processing stages, in order to make it easy to carry out slight adjustments, a third grade grinding process is performed that applies a further refined process to the grooves that have been made by the rough grinding process which has been carried out to a width and depth that is around three quarters of the planned finish. After this, the shape of the pattern that has been ground down by the rough grind and the third grade grinding is arranged and then the processed finish is ground smooth. The smoothing process is a careful grind for the final process of shaving.
After processing, the surface, which has become opaque, is polished and a radiance that possesses the clarity of the original glass is restored. No matter how well the glass is cut, the quality of Kiriko is dependent on the polish. In order to maintain the excellence of the Kiriko, the polish in the final process is important as it determines the attractiveness of the Kiriko. 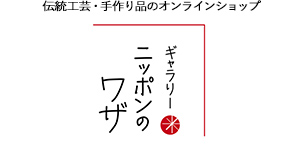 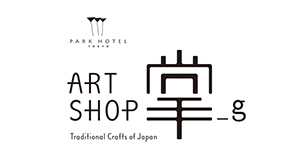 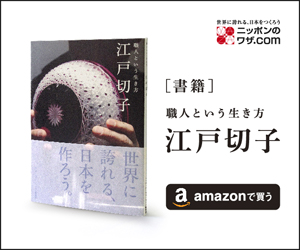 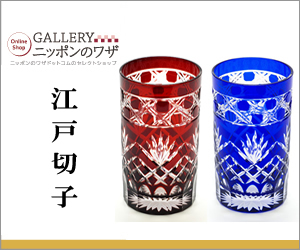